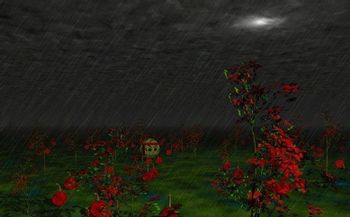 Alone across the cherry fields...
The blobs were a peaceful race. They wanted for nothing. They spent their days raising their children, harvesting cherries, and studying astro and quantum physics.
Wars and conflict to the blobs was the stuff of legend. Most had never even seen a weapon and some even doubted their existence. Theirs were happy lives, made even better by their clean world, excellent climates, and holiday resorts.
Advertisement:
Then something went terribly wrong.
As the alien invaders' bombs rained down on their homeworld, the blobs' worst fears had been realized...
The blobs were going to war.

. Metal Blob Solid and Blob and Conquer are written in C++ and available on all linux platforms, but only MBS has been successfully compiled for windows. Attrition is available on Android. MBS and BAC are completely open-source, with the source code being linked on Parallel Realities' website.

The blobs are a peaceful race, as detailed in the above monologue. They are invaded by the evil Biomechs, a race of cyborgs looking to conquer the universe. The blobs, knowing little of weapons or warfare, are quickly defeated by the invaders, leaving one blob by the name of Bob to rescue the prisoners and organize the fight to take back the planet.

Metal Blob Solid is the first installation in the series. The biomechs have occupied the blobs' planet and are running unchecked. Bob, the hero of the story, sets out on a guerrilla war to rescue MIAs and put a stop to their plan. Along the way, it is discovered that the reason for the invasion is To acquire the four crystals - Fire, Time, Space, and Reality - and use their power to further their goals. Bob fights his way through a number of enemy bases, killing many aliens and rescuing many of his fellow blobs. In the end he Teleports onto the alien's orbital space station, kills their leader, and blows it up. He rallies the blobs and prepares them to fight to take back their world.

Blob and Conquer is the second installment. 8 months after the events of Metal Blob Solid, the blob resistance has gained considerable traction. They are now ready to strike at the four main biomech bases - Supply Depot, Communications, Assimilator, and The Biomech Tower. Then one night, a scout named teeka does not return from patrol. A highly reliable blob, his absence is unsettling to Bob. Bob sets out alone across the cherry fields to find Teeka, but walks into an ambush - setting into motion the gears of a plan that may decide the blobs' fate...

Attrition is the third installment, though it takes place chronologically before Blob and Conquer. After the events of Metal Blob Solid, Bob sets out on his guerrilla war once more to wear the biomechs down one block at a time and pave the way for a blob victory.