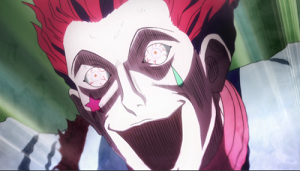 Just when he couldn't get any creepier.
Hunter × Hunter has been noted as being one of the darkest series to have ever been serialized in Shonen Jump. With fairly extreme content such as mass murder (including children), hundreds of extremely brutal deaths and a gritty atmosphere, it's no wonder that people are disturbed at some of the stuff Togashi has written and drawn.
Advertisement: