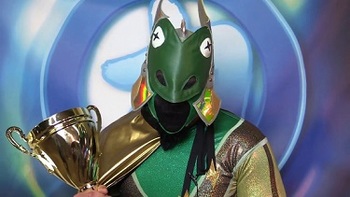 The Estonian Thunderfrog is an American Professional Wrestler from Minneapolis, Minnesota best known for his work in CHIKARA. He debuted at WiF! The Allentown Potassium Massacre on October 27, 2012 with a disqualification victory over Kobald. He wrestled for the various Wrestling Is... promotions, officially entering CHIKARA in 2014 as part of The Baltic Siege with The Latvian Proud Oak and The Lithuanian Snow Troll. At The Living Daylights on July 19, 2014, he destroyed Tursas of Die Bruderschaft des Kreuzes with his Hammer of Peace. The following night, at The World Is Not Enough, Deucalion, the Big Bad of The Flood, the amalgamation of Heel groups out to destroy CHIKARA, destroyed him with the Chokebreaker. After Icarus destroyed Deucalion after their match at the Season Finale iPPV Tomorrow Never Dies on December 6th, a video was shown of a frog with a cape on a farm. He returned to action at BCWnote Born Champions Wrestling in Minnesota Laid To Rest on May 8, 2015 with a victory over El Bano. He wrestled for BCW and Prime Time Wrestling and returned to CHIKARA at Making A Stand on August 22nd, 2015. He reclaimed his Hammer at the end of the 2015 Season Finale Top Banana on December 5th, turning back into the Thunderfrog. At National Pro Wrestling Day 2016 on February 6th, he defeated Wani in the final of the Young Lions Cup Tournament. He has also wrestled for Excellence Professional Wrestling, F1RST Wrestling, Pro Wrestling Battleground, and other promotions in Minnesota. Along with his YLC run, he and Wildcat held the PTW Tag Team Titles

, he is a former PWB Battleground Champion