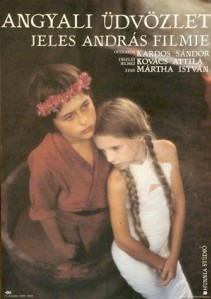 The Annunciation (or Angyali udvozlet) is a 1984 Hungarian film by Andras Jeles. It is essentially an adaptation of the classic Hungarian play The Tragedy Of Man... performed entirely by a cast of prepubescent children.

In the Garden of Eden, Adam and Eve (Peter Bocsor and Julia Mero) live peacefully until their new neighbor Lucifer (Eszter Gyalog) shows up and convinces Eve to eat an apple from the Tree of Knowledge, breaking one of the few rules imposed by God. Afraid that she will be banished and that God will give Adam a new wife, Eve convinces Adam to eat from the tree as well, and thus they are both banished from Eden. Bitter at the hardships they face in the world beyond and plagued by visions of the future (a consequence of eating the apple), Adam demands that Lucifer help him make sense of his visions, and thus begins a journey through time and space as Lucifer shows Adam visions of Ancient Egypt, Athens, Rome, Byzantium, Prague, post-revolutionary Paris, and Victorian London, and Adam witnesses the brutality that underlines human history.