Film / Don't Go in the Woods 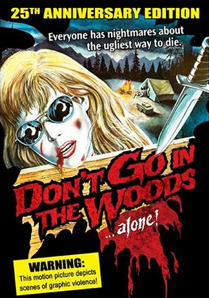 The plot, as it were, depicts two couples (Craig and Joanie, and Peter and Ingrid) heading into the wilderness near an unnamed town, intent on camping out over the weekend (to the chagrin of Peter, who thought by "camping out" his friends meant "get a cozy cabin somewhere"). As the quartet hike through the beautiful countryside, a grizzled and deranged mountain man (simply credited as "Maniac" and called "the Wild Man" in one scene) who lives in a hidden, dilapidated cabin begins picking off random people who happen to be in the forest. The Maniac's preferred weapon is a big, homemade spear.

Along with the usual hikers and campers, victims also include a bird watcher, a pair of tourists, a honeymooning couple, an artist, a fisherman, and a lone man in a wheelchair.

As the maniac is running amok, the four main characters soon realize something is wrong. They become scattered after Craig is murdered, forcing them to fight for survival in the dangerous wild on their own.

Meanwhile the local sheriff — after putting off investigating the numerous missing persons reports filed as of late — begins looking into the disappearances. Although it may be too late...

The film recieved a special edition DVD release by Code Red in 2006, after being in VHS Hell for several years. The release came with a variety of special features, such as two commentaries, an hour-long featurette composed of interviews with those involved with the production, old TV spots, and much more. In 2009, Code Red put this release back out as a part of double feature with the similarly-themed The Forest.

Deron Miller is a big fan of this film, to the point that he participated in the commentaries of the aforementioned DVD.

If you go down to the woods today, you're sure for a big surprise...: