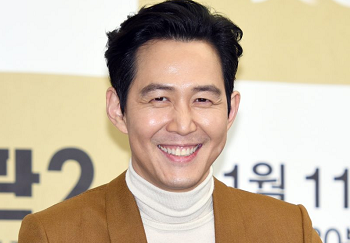 Lee Jung-jae (Korean: 이정재; born December 15, 1972) is a South Korean actor, businessman and former model. With an estimated net worth of US$5 million, Lee is one of the most successful South Korean actors.
Advertisement:

Born in Seoul, Lee debuted as a fashion model, then began his acting career on television, notably in the campus series Feelings (1994) and the drama Sandglass (1995). After his acting breakthrough in An Affair (1998), Lee's film career took off. He has starred in a variety of film genres, among them romantic films such as Il Mare (2000) (which would later on had an American remake called The Lake House) and Over The Rainbow (2002), the melodrama Last Present (2001), well known comedies such as Oh! Brothers (2003), action films The Last Witness (2001) and Typhoon (2005), heist film The Thieves (2012), film noir New World (2013), and period film The Face Reader (2013). He won Best Actor awards at the Blue Dragon Film Awards for City Of The Rising Sun (1999), and at the Fantasporto Director's Week for The Housemaid (2010). In 2021, Lee gained widespread international stardom and fame for his role as Seong Gi-hun, the main protagonist of Netflix's survival drama Squid Game. In December 2021, he was selected as Gallup Korea's Film Actor of the Year.

Aside from his acting career, Lee is also a businessman, having launched a chain of restaurants in Seoul, as well as founding several businesses including the development company Seorim C&D. He owns several of his businesses with fellow actor and close friend Jung Woo-sung.