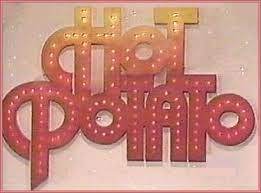 Hot Potato is a short-lived 1984 NBC Game Show that was both Bill Cullen's last network series and the last new game show format produced by Jack Barry's production company before his death.
Advertisement:

Two trios of players, each trio having the same occupation or other common factor, competed to guess the answers to multi-answer questions. In some cases, the contestants were predicting the most popular answers to survey questions similar to Family Feud, but most of the time they were general knowledge ("Name seven of the ten largest countries in the world"). Each question has a minimum seven possible answers. The player in control could either provide an answer or challenge an opponent to answer; players were eliminated from the round if they answered incorrectly or lost a challenge, thereby giving the opposing team control.

A team won a round by eliminating all three opponents or, less often, by supplying the seventh correct answer. The first team to win two rounds played the Bonus Round, in which the object was to make the correct choices from pairs of answers in a category.

Hot Potato debuted on January 23 and suffered mostly due to airing at Noon, a slot NBC affiliates generally preempted in favor of either local newscasts or syndicated programming. In a rather misguided effort to combat this, the show became Celebrity Hot Potato on April 23, removing the "three-of-a-kind teams" element as well as the Seven-Straight Jackpot (see below); the show ended on June 29, being replaced by reruns of Diff'rent Strokes, which, in turn, was replaced on September 24 with Super Password...a show that managed to last nearly five years at Noon due partly to help from independent stations in markets where the NBC affiliate was preempting it.

Despite its brevity, Hot Potato has become a cult classic through repeats on CBN, the USA Network and GSN in the years since.