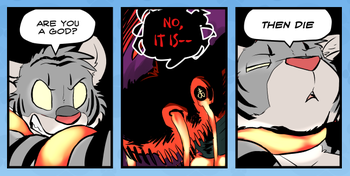 "It was either that or a Star Trek V allusion." "You made the right call."