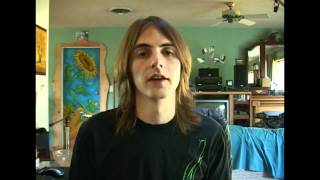 "Wow. Wow, wow, wow. Wow, wow, wow, wowowow, wowowowowowowowow motherfucking wow. Son-of-a-bitch god damn motherfucking wow. Fucking fuck into wow infinity. Wow the motherfucking god damn World of Warcraft into fucking wow Sham Wow. Fuckin' suck-my-dick son-of-a-bitch wow. Holy fucking shit. Make that god damn apple move. Fucking MOVE! Alright, there's another one, here's another one, there's going to be another fucking apple up your fucking ass. An apple a day keeps the motherfuckers away! There you go! Now drop down, and get your fucking dick blown off. CAUSE I BET THEY'RE GONNA COME DOWN! JUST LIKE THAT! GOD DAMN IT, MOTHERFUCKERS!"
— AzuriteReaction, raging while playing Owata

, otherwise known by his real name Dezmond Castner, is an LPer from Torrance, California. He is an LPer in the broad sense that he talks while playing games. He does not call them Let's Plays, though. Instead, he is more of a jack-of-all-trades. His current channel has a wide variety of video series going on or coming soon, including vlogs, epic stories, rants, commentaries, streams, among other things.

He originally started out posting Rock Band videos on YouTube. After becoming mildly popular, he started doing many other things, such as playing LSD: Dream Emulator and Happy Wheels. Over time, his off-the-wall raging, deadpan wit, and variety of content resulted in a sizable fanbase. He reached a new level of popularity after playing multiple rage-inducing video games including I Wanna Be the Guy and Cat Mario.

It's very likely that he has the most variety of game commentary on YouTube in terms of how many different games he's covered over different generations of consoles, as well as PC games and indie, obscure, and flat-out bizarre games. He currently puts up four videos a day, all of which usually vary over different series, and frequently does vlogs and rants over things in his life.

Due to a glitch in his YouTube subscription feed, he switched over to a new channel: "AzuriteYT

" in January 2013. He switched back to his old channel

in 2015, though, due to copyright strikes from Nintendo. As of 2019, he's since moved to only being active on his Twitch account as azuritereaction

, on which he often does livestreams of gameplay. The Youtube channels have since served as an archive.

As of January 1, 2013, he also has a webcomic called Era of Errors. Read it here, in archived format

Advertisement:
Games Azurite Reaction Has or Is Playing