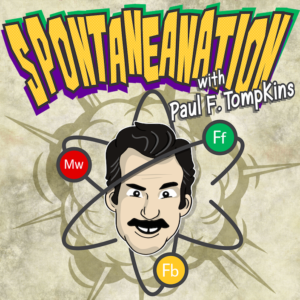 Spontaneanation with Paul F. Tompkins is a comedy/interview podcast hosted by actor/comedian Paul F. Tompkins, the former host of the Dead Authors Podcast, frequent guest of podcasts such as Comedy Death Ray Radio and The Thrilling Adventure Hour, and an actor in TV shows such as Bojack Horseman. Episodes of the podcast are divided into three parts; beginning with a brief, comedic monologue by Tompkins himself, followed up with an interview with a special guest, centered around a specific question asked of them, and ending with a long-form improvised comedic sketch performed by Tompkins and a 3-person panel of improvisational comedians. (The special guest will occasionally participate as well.) The show is generally done in-studio, but occasionally performed in a live setting, often at the Los Angeles lounge Largo at The Coronet, where Tompkins maintains a residency.

Improvisational comedy plays a central role in the podcast, and is a recurring theme throughout each episode. The question each special guest interview is based upon is given by the previous guest, (Often leading to some awkwardly specific questions) the long-form improv is also based upon details gleamed from the interview itself, incorporating a location specified by the guest. Even though the skit is completely improvised, some structure exists in the form of special sound effects used to move the setting about in time. (Backwards into the past, forwards into the future, or sideways to another location in the present.)

The proceedings are scored live and on the spot on piano, (Except for rare occasions when it is scored alongside the already-recorded podcast) performed by composer Eban Schletter, who has been a longtime collaborator of Paul F. Tompkins, and has written musical score for Mr. Show, SpongeBob SquarePants, and has been a session musician and collaborator for Garfunkel and Oates, Jill Sobule, and many more.

on the Earwolf Podcast Network.