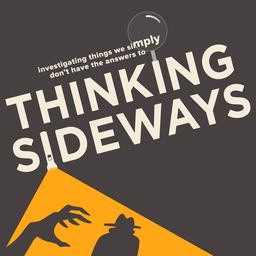 "Investigating things we simply don't have the answers to."
—series tagline

Thinking Sideways is the name of a podcast that explores a different unsolved mystery every episode. While these are usually of the true crime variety, topics have included historical peculiarities and travel disasters. The show is manned by three hosts from Portland, known mononymously as Devin, Joe and Steve. Their chemistry has been credited as one of the reasons behind the podcast's popularity.

The first episodes were released in 2013, with a new episode every Thursday. Length varies, but most episodes hit the hour mark.

While the trio does attempt to resolve the mysteries they discuss, they describe themselves as aiming more to "provide a primer in each mystery" than putting them to rest, which has led to a recognisable format each episode:

On July 26, 2018, Thinking Sideways released its final episode. Steve announced on the podcast that he was moving to Southeast Asia and given the timezone differences and unreliability of Internet connections, he felt continuing the podcast was no longer feasible.

You can find their website (and all episodes) here[1]