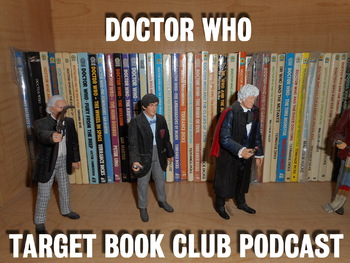 , created in 2016 by Tony Whitt, a former writer for Cinescape, WhatCulture, and various other web magazines, is Exactly What It Says on the Tin: a project in which he and a panel of two other people read and discuss the Doctor Who Novelisations from the 1960s through the 1990s in story order. (Not to be confused with The Doctor Who Book Club Podcast

, which looks at all of the various forms of Doctor Who fiction produced over the last five decades.) A new episode is released every other week, give or take, on Soundcloud, iTunes, and YouTube. The panel generally features an intermediate-level fan who has read none of the books but has watched some of the episodes (Danny Celedon for the first two, Dalton Hughes for all of the rest to date) and a novice fan who has neither read the books nor watched any (or very few) of the episodes (in the beginning this was Sheena Anna Para, and now it is near-permanent panelist Alyson Fitch-Safreed, semi-regular Jenny Ingersoll, or occasional guests such as Rory Jobst). Special guest panelists have included Trey Korte, Larry Van Mersbergen, and J.G. Mc Crory. The panel then looks at reviews by other readers as culled from Goodreads.com before giving their own opinion of the quality of the writing, the story, and anything else that comes to mind. Episodes run anywhere between fifty-five minutes to an hour and half, depending on how involved the discussion gets.