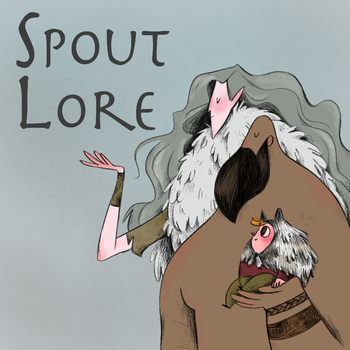 ...a brute, a druid and a thief who is but nine years old.
Gather round friends let me tell you a tale of three heroes noble and bold...
— Opening Theme
Advertisement:

Spout Lore is a podcast featuring Shawn O'Hara as GM leading Jessica Tai as Fat Billie the Halfling/Spring Fae Rogue, Paul Henry Opps as Vyng the Half-Elf Druid, and Abdul Aziz as Tachome Dhaume (or Tuck) the Human Barbarian in "A series of comedy bits, loosely connected by dice rolls." They play Dungeon World, a hack of Apocalypse World based on Dungeons & Dragons themes, and started releasing episodes in 2017 once a week before transitioning to biweekly.

The podcast starts with Tuck, Fat Billie and Vyng accompanying Dan "The Colonel" Fossey, Schlass merchant, to the town of Mudlark for the Hot Dog Festival before taking on too many jobs and being dragged into an adventure with a mysterious Fetch Quest for a group known as the Menders.