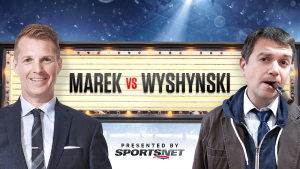 Jeff Marek of SportsNet
[We're going to get corner offices out of this one for sure, Greg!]
[Right away, your BS detector should go off.]
[Why do I know this crap? Something is wrong with me.]
[Are. You. In. Sane?]
and Greg Wyshynski of Yahoo! Sports
[You and I are not quite that dissimilar...]
[La la la la, hockey hockey hockey...]
[Seattle is playing egg-cellent defense these days!]
[(imitating Brian Burke

) What does that even mean?!]
debate hockey,
[Wyshynski: So much junior hockey knowledge in that big juicy brain of yours!
Marek: Oh yeah...]
pop culture
[Marek: See, I kinda look at our podcast here like jazz artists.
John Davidson

: There's are some bloggers that are great. They're entertaing, they're factual, it's fabulous.
Wyshynski: Damn right, J.D.!]
and more hockey!
[Marek: (in an old-timey voice) Just what we need is to shoot off the side of the barn! That's how I developed my wrist shot, shooting frozen cow patties in Lloydminster...]
Marek versus Wyshynski
[Wyshynski: (sarcastically) Marek VERSUS Wyshynski, huh?!]
— One of

the show's various intros, which never plays at the beginning of the show.

. The titular hosts were Jeff Marek

, reporter for SportsNet and Greg Wyshynski

, blogger for Y!Sports. Episodes typically consisted the hosts giving their take on the hockey news of the day (mostly focusing on the National Hockey League, but other ice hockey leagues and general discussion of the sport also are topics on occasion) and daily interviews with various people around the hockey world.

For most of the show's run, episodes were broadcast Monday through Friday (with exceptions for holidays) at 2 PM Eastern/11 AM Pacific, streamed live on sportsnet.ca on the alternate online feed for SportsNet 590 and on daily posts on Yahoo's Puck Daddy

blog. Starting for the 2015-16 NHL season, the show moved to a pre-recorded format due to the hosts receiving increased duties at their day jobs, with episodes guaranteed on Mondays through Thursdays and occasional Friday episodes when possible. At the start of the 2017-18 NHL season, Jeff Marek announced

the end of the podcast, with the final episode airing on October 12, 2017.

of all episodes, and episodes are also available for download on iTunes

Marek vs. Wyshynski provides examples of the following