Podcast / Are You Scared of These Stories? 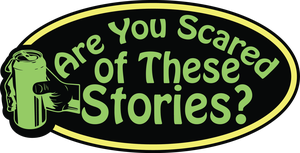 Submitted to scare you...
"In the late 90's/early-Oughts, three friends met in the woods to tell each other scary stories. They recorded their stories, and captured unexplained, paranormal phenomena. The whereabouts of the members of the Scary Storytellers Society are unknown. All that remains are the tapes that were recovered from their abandoned campsite, and after you listen to them you'll have to ask yourself... Are You Scared of These Stories?"

What if Are You Afraid of the Dark? starred three awful man-children in their late 20s instead of teenagers?

Robert Hibbs, a lonely boy obsessed with scary stories, pressures his friends into joining him around a campfire in the woods for one purpose: telling each other scary stories. While he records it all on a Talkboy. Robert Owens and Joshua Jenkins (a couple of losers in their own right) make no secret of their disdain for Hibbs and his plans, but that doesn't stop them from attending his meetings.

Unfortunately, they're all absolutely incompetent at storytelling, and most of their time is spent interrupting to offer up unconstructive criticisms. The real spooks come when the subjects of their stories inevitably break the 4th wall to terrorize them, or when they break formula to deal with occult sponsorships and saucy Armageddon.