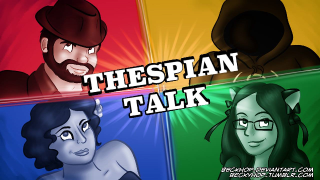 Thespian Talk is the founding podcast of both Gomer the Ranting Thespian and RT Gomer Productions. It's a current events podcast, hosted by Gomer, as well as a trio of rotating co-hosts, Holly Christine, The Cat, and The Omega.

The show has been going since 2008, with a couple of hiatuses, due to scheduling and life events, as well as a numbering reboot, once Gomer decided to take the show to Blip.tv, so as not to confuse audiences. The show can be found on iTunes and is currently featured on RT Gomer Productions, as well as Nerd Vice.

The show itself sees Gomer and company discuss the latest news of the week, ranging from political news stories to just random stupid things people do and get on the news.