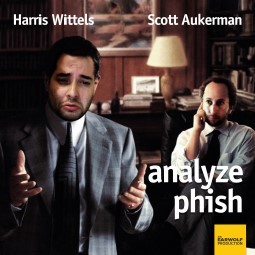 Hello everybody. I'm Harris Wittels, and I'll be your tour guide through the cosmos. Sorry.
- Harris's intro
Advertisement:

is a podcast on the Earwolf network, in which Harris Wittles (Parks and Recreation) attempted to make Scott Aukerman (Comedy Bang! Bang!) a fan of the band Phish. They discussed the band, listened to their music, and attended live shows together.

The show worked off the dynamic between Wittels, a devoted Phish fan who had attended 300 of their concerts, and Aukerman, who began the series having a slightly negative but mostly agnostic opinion towards the band, and was curious about their music and fan culture. Early in its run, Wittels recieved some blowback from fellow Phish fans, who claimed the podcast was not a proper introduction to the band, in part because he regularly played Scott snippets of songs as opposed to full jams. In an article

he wrote for Relix, he argued that the podcast was intended to be comedic first and foremost, and he also wanted to keep listeners' interest: He observed there's not a lot that's funny about two guys silently listening to a 20 minute Phish song. That Relix article also doubled a more serious guide from him for those interested in actually getting into the band.

The podcast had an infrequent schedule, and Wittels claimed the show would end on the spot if Aukerman decided he actually liked Phish. By the end of its run, Aukerman still hadn't become a fan, but he had grown to understand the appeal of the band. Only 10 episodes of the podcast were made before Wittels died of a drug overdose in 2015.