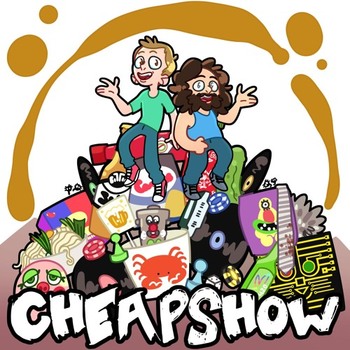 "I hate you and your fucking noodle posse." note The show's hosts: Paul Gannon and Eli Silverman, respectively.
"The Economy Comedy Podcast."
—The show's oft-misquoted tagline

is a British comedy podcast starring Eli Silverman and Paul Gannon. While ostensibly an "economy comedy podcast", with features focusing on cheap or low quality goods (hence the name), in reality this is a hook on which to hang the main draw of the show - scatological humour and the love-hate relationship between the two hosts, with the love usually expressed grudgingly and the hate expressed freely and profanely.

Oh, it's the fucking List of Tropes! AND THAT'S RIGHT!: