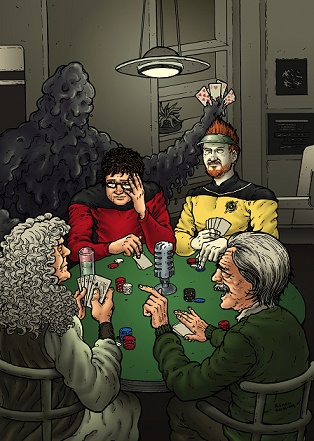 Clockwise from top left: Armus the Skin of Evil, Matt, AAlgar, Einstein, and Isaac Newton. Art by Ramon Villalobos.
Serious about Trek. But not too serious.
Advertisement:

The Post Atomic Horror is a podcast dedicated to reviewing Star Trek. The entire franchise, that is, episode by episode. They are currently working through Discovery and Picard as they become available, having already completed The Original Series, The Next Generation, Deep Space Nine, Voyager, Enterprise and even The Animated Series, as well as all the movies. They are currently the most comprehensive Star Trek podcast ever produced, as the first and to date only one to review every single episode and movie of every series, as well as several books, comics, and video games.

The show is hosted by Seattle writer Ron "AAlgar" Watt and his stalwart Canadian associate Matt Rowbotham, often with one of a rotating stable of guests from around the world. A typical episode of the podcast covers two Star Trek episodes, each having a short, humorous summary followed by a discussion/review, and a selected quote. There are also supplemental episodes where the hosts will answer viewer mail, discuss the current season as a whole, and talk about broader aspects of Trek, and biannual crossovers with the now-defunct Doctor Who podcast Drunken Time Travel, where the hosts challenge each other to review other sci-fi/fantasy series, including Pushing Daisies, Voyagers!, Sliders, and of course Doctor Who.

In the time period between Discovery and Picard, the hosts reviewed a number of other genre shows. When there is no Star Trek available, they now record Kids Love Batman, a DCAU review podcast.

The show can be found on iTunes, or on the web at postatomichorror.com

This podcast features examples of: