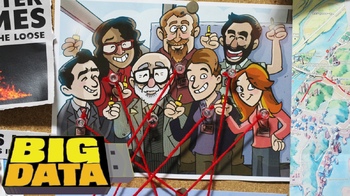 The keys to the internet will be taken out of their hands.
"This is the sound of..."
-Dalles Spieler
Advertisement:

There are seven keys to the internet, and they are needed to keep it afloat. Reporter Dalles Spieler discovers from an unknown source that the keys are being stolen and is given records of the individual thefts as they happened. With help of her producer, Mic Rara, she publicizes the files in the format of a podcast and does some sleuthing of her own. Can the internet be saved?

The nine episode podcast by Ryan Estrada is a spinoff of Broken Telephone and is an anthology of different heists taking place around the world as the seven keys are stolen by each key holder. Each episode is also infused with a bunch of information about a variety of subjects from hacking to trolling to penetration tests. It stars a few big names, like Felicia Day and Paul F. Thompkins (Dead Authors).

And here's the best part: it could all really happen.

If seven thieves stole seven keys, the trope list as we know it could could come to an end!

Not much beach, what's new with you?