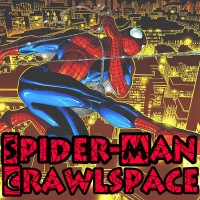 Spider-Man Crawlspace is a website dedicated to all things about Stan Lee and Steve Ditko's famous Marvel Comics character Spider-Man. It was founded by Brad Douglas in 1998. It hosts reviews, editorials, news, interviews, forums and other Spider-Man tidbits.

and the podcast page is here

One of its more popular attractions is the podcast, which began in 2006 and is published several times a month.

As of 2015 the podcast consists oft he following panelists: