Podcast / No Such Thing As A Fish 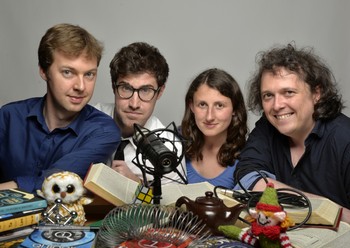 A weekly podcast coming from the QI offices in Covent Garden in London, join Dan Schreiber, Anna Ptaszynski, James Harkin, and Andrew Hunter Murray as they gather around the microphones and share their four favorite facts from the last week and discuss and explore related facts and ideas.

The first episode was released on March 8, 2014. Since then, the show has grown into one of the most popular British podcasts. Many episodes are recorded in front of live audiences, attracting large crowds around the UK as well as other countries.

The podcast has also spawned a spin-off TV series called No Such Thing as the News, which ran for 2 short seasons in 2016. The series focused specifically on ongoing or recent events, as opposed to more general topics discussed on the podcast.