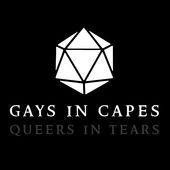 Your weekly dose of crying over DND.
Advertisement:

A Dungeons & Dragons roleplay group based in Minnesota who have been around since 2013. They revolve a bit less around the nitty-gritty of gameplay and a bit more around roleplaying, character development, and complex world building. There are several campaigns going at once with various different DM's, though the plots and character are often interrelated. The website

gives descriptions of all the players, characters, and worlds, and hosts livestreams of most of their sessions. Their podcast

Tropes are broken down by session.

Works contained in this series:

open/close all folders
QDND
Short for "Quouse DND", this campaign began in September of 2013. Season 1 is complete and available on Youtube

, and season 2 is being streamed weekly. It follows a set of heroes as they try to stop an evil cult and eventually a war. Arnam is killed repeatedly. The original adventuring party consisted of:The session is DM'd by Ben.

QDNDOS
QDNDOS takes place 15 years before the events of QDND and has been running since winter of 2013. The two sessions have tied together in some unexpected ways, though QDNDOS in general has had some fairly rotten luck. To what degree they're responsible for the events of QDND is still unknown. The original adventurers were:

DDND
DDND was the first campaign played by the GiC cast and is the longest running; it began in fall of 2011 and is still going, albeit sporadically. The bulk of the campaign predates the livestream, but text logs of the early sessions are available. The group, in a sort of round-about way, are trying to stop an evil sorcerer from summoning the legions of hell to this plane. The original adventuring party consisted of:The session is DM'd by Alex.

Advertisement:
MODND
MODND, or Modern DND, takes place about 500 years after the events of QDND and has been running since Q1 winter of 2015. The original adventuring party consists of:The session is DM'd by Ben.

DNDASH
DNDASH started Spring 2014, and follows a dysfunctional group try to save the world from demons while accidentally becoming pirates. The adventuring party consists of:The session is DM'd by Ashley.