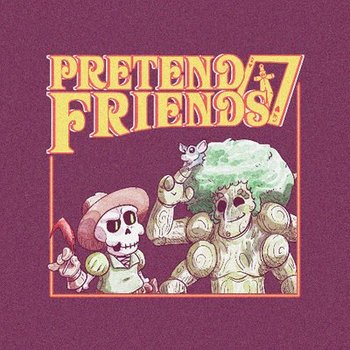 The plot of Season 1's campaign is a science fiction tale following three fugitives—Davl Titor, Killcat the Space Cad, and Space Freely—as they rebel against the tyrannical Sol Empire. Along the way, they acquire new allies, try to figure out who they are, and cause mayhem wherever and whenever possible. Season 2's campaign takes place in a fantasy setting where our four heroes - Ken (alongside his sugar glider friend Sweetums), Deadward R. Murrow, Tindy Firehatchet, and Snorkul - as they travel through the Land of the Broken Isles, solving quests and getting into fantasy-related shenanigans and hi-jinks.

As of writing, neither “Space Kings” nor “Fantasy Hour” are fully-published game systemsnote They were actually created by Kevin Cole and Hadley St. Clair themselves, and are using Pretend Friends as an opportunity to fine-tune the system, so some tropes might apply to the game systems themselves.