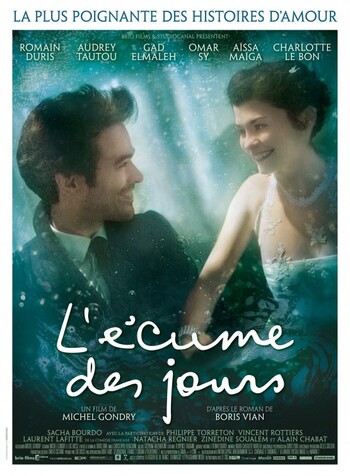 Mood Indigo (L'écume des jours—"Froth of the Days") is a 2013 film from France directed by Michel Gondry and based on a novel by Boris Vian. The novel has the same French title as the movie but in English is titled Froth on the Daydream.

Colin (Romain Duris) is an Idle Rich young man who has little to do to fill his days other than inventing stuff like the "pianocktail"—a piano with the keys connected to various bottles of alcohol that makes different cocktails depending on what notes one plays. One day, his friend Chick invites him to a party, where he meets an enchantingly beautiful brunette, Chloe (Audrey Tautou). They fall in love, and after a whirlwind courtship, they get married. Meanwhile, Chick has fallen in love with Alise, niece of Colin's live-in chef Nicolas (Omar Sy).

All of that takes place against a whimsical background that features deeply surrealistic, bizarre imagery. However, at the midpoint of the film, Chloe takes ill. The mood of the film takes a sharp turn, going from shiny, joyful technicolor to darkness and death.