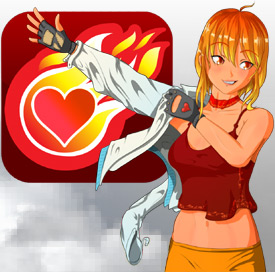 Okay, so it's not a Badass Longcoat, but it's close.
The digital universe of Netwerk. Thousands of servers, millions of living Programs (the evolutionary descendents of Apps) living in relative disharmony as one massive social network. It’s home to individuals seeking love, happiness, madness, trolling, order, stability, lawlessness, anonymity, individually, community, and everything in between. Binary people making binary decisions... but life is what happens between Zero and One. Life happens within the floating point decimals...
Advertisement:

is a Cyberpunk story, about artificially intelligent Programs living in an entirely digital world. The culture of this world is shaped vaguely like the Information Age, complete with all the good and the bad... social networks, toxic online games, hashtag mobs, and avatar-based discrimination.

The Un-Twist to all of this is that there's clearly a world beyond the computer-based reality of Netwerk... but while the reader is likely aware of this, the characters are not. The process of realization, along with all the implications of how and why their world is in this particular shape, drive the main narrative. Along with physics-simulated avatars kicking butt, sendups and subversions of Hollywood Hacking, and the occasional Love Triangle.

Floating Point is structured as a Web Serial Novel, written by Stefan "Twoflower" Gagne. It consists of a series of both free and for-pay stories, also available in published book form with various extras. It's currently a work in progress.