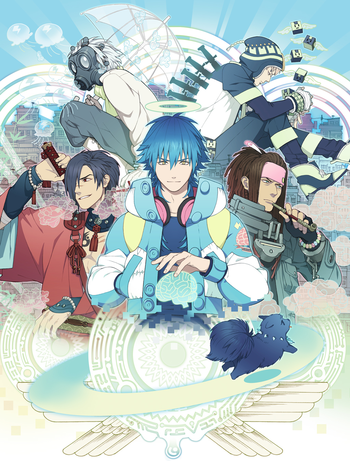 "I will destroy you."
Clockwise from top left  Clear, Noiz, Mink, Ren, Aoba, and Koujaku
"You finally came...
I've been waiting for so long...
come quickly...
destroy me...
with your power"
Advertisement:

The fourth Boys' Love Visual Novel created by Nitro+CHiRAL, DRAMAtical Murder, also known amongst fans as DMMD, features crisp, clean and fluid art style, Electronic Music soundtrack, various character expressions and elaborate CGs, a dark sci-fi story rendered bright and colorful, and of course, tons and tons of Boys' Love, with four main routes and one unlockable one. A first press edition was released on March 23, 2012, and a regular edition came out on the 27th of the following May. A sequel, DRAMAtical Murder re:connect was released on April 26, 2013. DRAMAtical Murder re:code, a Play Station Vita remake (with one more route) of the original game tailored for a younger audience, was released on October 30, 2014.

Some time ago, Midorijima, an island southwest of Japan, was purchased by the highly influential Toue Company. Their plan was to build a high-tech luxury amusement facility called Platinum Jail, for the exclusive perusal for all those rich enough around the world to afford it. Of course, the original inhabitants of the island got screwed in the process. What coexistence there once was between Midorijima's people and the lush natural environment prevalent throughout was abruptly cut off. All those who didn't leave the island at Toue Company's suggestion were eventually forced to move to a corner of the island called the Old Resident District. All those who have stayed cannot leave, unless they receive Toue's permission. The Toue Company won't give that permission anytime soon, as punishment from the head of the company who was highly annoyed at the more stubborn locals. Soon after development on Platinum Jail completed, Toue abandoned the former residents of the island outright.

Twenty years in the future, in Midorijima, an island southwest of Japan, a guy named Aoba lives with his tough-as-nails doctor granny, Tae, and his dog-type AllMatenote a form of AI who work primarily as information networks, and implicitly, companions for those who have them, Ren. Aoba's always found it odd how dropping his voice to a certain inflection could drive people to call up Heibon, the shop he's working at, to hear it again and again, buying Heibon's mechanical goods every time. But hey, it does its job, so why not make use of it? Sadly, said power can't really help him with that trio of rambunctious children that always show up at the store just to make a mess. He also has to contend with his unusual friends that are involved in gang activity that he's long since left behind. His life is an amicable one, although as with all who've been left to carry their lives out in the Old Resident District in the years of Toue's acquisition of Midorijima, it is by no means prosperous. In those ensuing years, a game called "Ribsteez" (also known as "Rib") rose in popularity, in which gangs of young men would go out of their way to engage in turf wars against one another. More recently, another competitor have been taking over people's interests; a game called "Rhyme," whose participants and their watchers scatter throughout the city to engage in fights that unfold on a Virtual Reality but are seen right before their eyes. Anyone can play "Rhyme" if they have an AllMate and the fights are mediated and started by Usui, a judge with a female appearance and a male voice who randomly appears to signal the start of a match. Recently, a trend of "drive-by" matches have started, where people can force others into a "Rhyme" match with no mediation by Usui and most dangerously, any injuries taken during the game can impact the player's health in real life.

Aoba just wants to keep the peaceful life he shares with Tae and Ren, but the accidental download of a mysterious 8-bit game called "Silent Oath" and getting caught in a drive-by "Rhyme" game leads to any real chance of normalcy in his life going out the window...

An English patch for the full game can be found online

. In Anime Expo 2018, JAST USA announced an official English localization, which was released on April 6, 2021.

An anime was announced as part of the summer 2014 anime lineup, the PV can be watched here

. A stageplay adaptation was announced in 2019 where it had successful runs in 2020.