The characters in the Devil Bear webcomic. 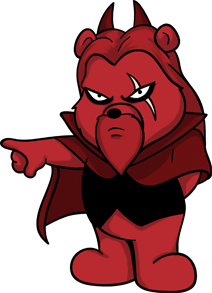 The titular "Devil Bear", and main character of the comic. He is the current ruler of Teddy Bear Hell, where sinful teddies go when they die. Formerly, he was Justice Bear of the Virtue Bears, until he got annoyed at their attitude towards a girl called Ursa and quit.

Aides to the Devil Bear. They are patterned after the Seven Deadly Sins, and often accompany him on his adventures. Their job usually involves torturing the residents of Teddy Bear Hell.

Tropes that apply to the Daivas in general:

The Daiva of Lust and for a while, Gluttony. The most active of the Daivas, and Bearalzebub's most trusted companion.

The Daiva of Sloth. Lounges around and falls asleep at a whim, much to the chagrin of Lucy. Developing a little pot belly as a result.

The Daivas of Envy and Greed, respectively. They are identical twins that are never seen apart, and act as Bearalzebub's lawyers.

The newest Daiva of Gluttony. New to the concept of being a Daiva, and can be said to be the protege of Lucy Fur. Replaces both Lucy and the deceased Sinnamon in this role.

The Daiva of Wrath. She was sealed in a block of ice until a foolish Poquebear released her, causing her to unleash hell on...well, Hell and attempt to murder the other Daivas. In addition to that, she is also the reason why Bearalzebub left the Justice Bears.

The Daiva of Vanity. She is the newest member of Bearalzebub's Daivas but was originally the Daiva of the original Devil Bear, and thus the one with the most experience on the team.

The original Daiva of Gluttony, before she was killed by Ursula.

A group of Daivas hired by Raine in her attempt to create a bootleg Teddybear Hell and replace Bearalzebub.

A third devil bear created by bootleg Daivas as part of a project by Raine, who was attempting to replace Bearalzebub with someone under her control.

The official leaders of Gener-aah-city.

Relatives of the Virtue Bears.

A naive poquebear with a talent for machinery.

The results of Raine's unethical experiments to seize power. She originally intended to dispose of them, but Bearalzebub reluctantly becomes their Honorary Uncle at Cayenne's urging.