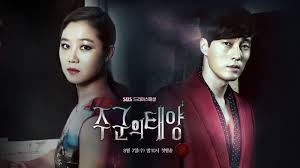 Seven years after an accident Tae Gong Shil is barely getting by. The accident left her with the ability to see ghosts, seriously affecting her ability to keep jobs. The ghosts are scary, and persistent. On a dark and stormy night she catches a ride from a man she's been told "Will be able to avoid the lightening but can't avoid you".

He is Joo Joong Won the CEO of Kingdom shopping mall, and he has his own issues. Although rich, handsome and successful he is not a nice person and many people believe that he still carries guilt from the death of his first love in a kidnapping.

The Kingdom Mall has recently hired a new head of security, Kang Woo, a former soldier who may be more than he appears. He keeps running into the Kingdom's model idol/actress Tae Yi Ryung. And he lives in the same study motel as Gong Shil.

Written by The Hong Sisters Master's Sun is a horror romantic comedy.