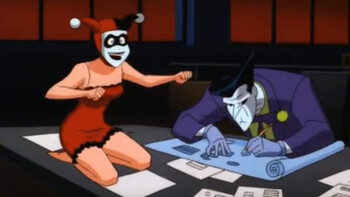 It looks like these two have been together for a long enough time for this to happen.
Advertisement:

Batman: The Animated Series tended to use Censor Decoys, and quite a bit ended up getting through (makes you wonder about the stuff that got cut). On top of that, the show had quite a bit of clout in its heyday and was able to push through some images and dialogue that would normally throw up a red flag (and sometimes did).