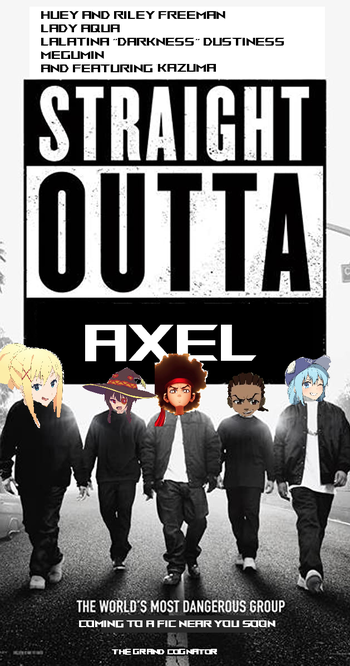 A TALE OF FRIENDSHIP, HONOUR, AND THE GLOCK XVII
Advertisement:

When Huey and Riley Freeman died to finish off Mecha Wuncler, the last thing they expected to see in the afterlife was a silver-haired and very white "goddess" named Eris. Because the afterlife is a bureaucracy run by white people, Eris' superior Aqua gave them the choice of going to paradise... or being revived in another world to do battle with the Demon King with a special cheat ability.

Only problem with that standard selling point for the recently dead?

The Freeman brothers are not Japanese hikikomori and have never even touched a Japanese RPG.

Aqua's boss, who appears as none other than Morgan Freeman, decides to punish the lazy goddess by sending her with the brothers as their glorified tutorial. Now stuck on this world, the Freeman brothers need to learn to navigate this new environment while getting VERY pissed off at the ridiculous level-grinding.

in a collective fit of quarantine-induced cabin fever. The story follows Huey, Riley, and Aqua exploring the world while providing commentary on the ever-popular Japanese Isekai genre through the lenses of two African-Americans.

Morgan Freeman's Blessing on this Beautiful Hood! provides examples of: