Comic Book / The Treasury Of Croesus 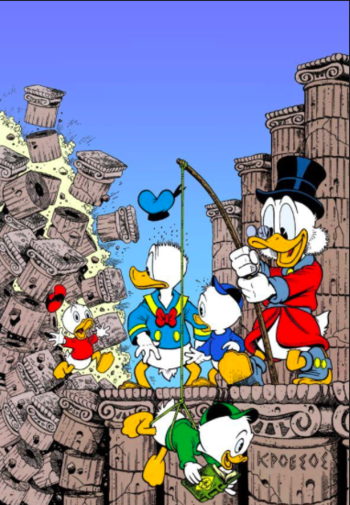 "The Treasury of Croesus" is a 1995 Uncle Scrooge comic story by Don Rosa. The story was first published in the Danish Anders And & Co. #1995-04; the first American publication was serialized in Walt Disney's Comics and Stories #601-603, in February-June 1996.

We start with Scrooge McDuck and his nephews, Donald Duck, Huey, Dewey and Louie thwarting Magica De Spell's "Most bizarre and complex" scheme to steal Scrooge's #1 Dime. Scrooge reminds us of her motives to gain the Midas Touch by using the first coin of the history's richest man. Donald grumbles that neither she nor Scrooge will ever be happy until they are as rich as Croesus, but Scrooge insists that he's richer. But since Croesus lived so long ago, who knows? As it happens, the Duckberg Museum is holding an exposition on Croesus, so the Duck family decide to pay a visit.

At the exposition, The Ducks meet Professor Owotta Pigayam, and he shows off a pillar section that was once part of the Temple of Artemis. Croesus, king of the nation of Lydia, had the temple built to impress the Greeks, but in 463 AD, the emperor of the Byzantine Empire had the Temple dismantled and hauled away in pieces. There are Greek letters chiseled on the column, but no one has been able to translate the ancient Lydian. Naturally, the Junior Woodchuck Guidebook can, and it apparently says, "I, Croesus, richest of men, dedicate this temple of Artemis, Goddess of the moon. This temple serves as only half of my offering to the Gods! I also offer the Olympians the contents of my royal treasury located at continued on next column" Scrooge immediately demands to see the next column, but the museum only has that one. The rest of the Temple's columns were scattered across Europe by Emperor Leo the Great as gifts of conquest. And since there's no way to tell which column was next in the colonnade, there's only one thing for Scrooge to do; find them all!

Over the passing weeks, Scrooge's locate pieces of the Temple all over the world, which the Duck buys or rents for his use. Once they've all been gathered, the Ducks go the site of ancient Ephesus, where the column bases were, and rebuild the Temple of Artemis as it originally was. Close behind is Professor Pigayam, spying on the Ducks' work. While Huey, Dewey, and Louie translate the Greek Lydian at the top (Croesus had intended his message for the Gods, after all), Donald notices Pigayam and brings him to Scrooge. Pigayam accuses Scrooge of having no right to his endeavor, Scrooge reveals that he's been after Croesus' treasure for a long time, and has a special permit with "Unlimited duration" given by Sultan Abdul Hamid fifty years ago. As the two argue, Scrooge unwittingly removes the jack holding up one of the columns, causing the entire thing to collapse. Thankfully, Huey, Dewey and Louie are able to avoid serious harm and managed to translate the inscription. Unfortunately, it was just a list of praises for Zeus. But, on the capital of the colemn where the inscription ended, ancient coins spill out, made of electrum, the material Croesus used to make the world's first currency. On the coins are the letters Zeta, omicron, and the ancient form of Pi, and underneath is "Tmolus", the mountain where Croesus found his gold. Is that where the treasury is?

The Ducks make tracks to Mt Tmolus, now called Boz Dag. On their way, they find the river Pactolus, where Croesus found his gold, just as Scrooge found his own gold in the White Agony creek. Incidentally, it is said that King Midas bathed in the river to be rid of his golden touch, the same power Magica covets. At the top of the mountain, they find a massive Tumulus, a massive pile of rubble. Scrooge sends his nephews to hire dig workers, but really just wanted them out of the way so he can blow up the Tumulus with dynamite before Pigayam shows up.

And shows up Pigayam does, with an army! As it turns out, Pigayam is the secretary for the Turkish Government's department of antiqueties. He feels that the treasury of Croesus belongs to people of Turkey, especially after another foreigner, Heinrich Schliemann, took the treasure of Troy for himself. Scrooge insists that his permit is valid, but Pigayam has a legal order to revoke said permit. As Pigayam moves to serve the order, Scrooge detonates his dynamite.

The explosion reveals what was under the tumulus- an ancient money bin! And inside is a massive swimming pool of ancient coins. And at the bottom is a sealed vault supposedly containing Croesus' greatest treasure. Before the vault is opened, Pigayam approaches Scrooge with a bargain. The Turkish Government will sue for ownership of the Treasury, but the legal matter could take decades to settle. So, Pigayam offers to grant Scrooge uncontested ownership of the greatest treasure of Croesus if he withdraws his claim on the rest of Treasury. Scrooge's impatience wins over his greed, and he agrees. The vault is opened.

Inside is an empty room, with a single coin on a pillar. Turns out Croesus' "Greatest Treasure" is the first coin he literally made. As Scrooge has an epic meltdown, attention is drawn to an ancient mural; The reason Croesus hid his coins is because the witch Circe wanted to use them to gain the Midas Touch. At this, Scrooge has an idea...

At Mt. Vesuvius, Magica De Spell makes her Midas Touch Amulet from Croesus' first coin. When it doesn't work (On Donald, no less!), she accuses Scrooge of giving her a fake. But Scrooge insists the coin was real. He wanted the spell to work, because it would mean Magica would leave him and his Number One Dime alone. But since it didn't, it proves that he, Scrooge McDuck is the richest man in history and not Croesus. Donald finally loses it and tears into Scrooge and Magica for their greed, asserting that they'll never be happy no matter how much money they make. This act is applauded by Huey, Dewey, and Louie, who declare that if Scrooge is the modern Croesus, and if Magica is Circe, then Donald must represent Solon, the wisest man in Ancient Greece. He too once told Croesus that wealth alone can never bring happiness. Mollified, Donald sets off with a happy song, leaving Scrooge and Magica angry and confused.

This story shows examples of