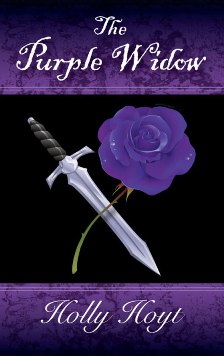 The war has just begun...

I will be followed.
- Last lines

The Purple Widow is a fantasy novel, written by homeschooled student Holly Hoyt at the age of twelve with the help of her ten-year-old brother, Jeffrey. It is the first and, so far, only released book in a series the two of them author jointly, known as the Omen Island Chain series

The story is set in 1422 on the wealthiest island of eponymous chain, Coccinus, where a humanoid, pink-eyed species called Snamuhs reign and where humans are outcast. Prince James of Tommikia, Coccinus' sister island, sets sail to marry the Princess of Coccinus, whom he knew and befriended as a child; his squire and Irish human friend, Glen, tags along in hopes of finding a life beyond rags. Unknown to everyone, Prince James has been living a double life, passed onto him by his late grandfather, as a masked vigilante known as The Purple Widow. With the help of his recruits (side-kicks) and a sassy former-prostitute who deems herself Arachna, The Purple Widow vows to fufill his secret destiny and live in Coccinus to protect the Coccish peasantry from the dreaded Supatcos, who are at war with the Snamuhs and feed on human flesh. But chaos ensues when The Purple Widow meets Princess Danamorescia, who reveals she doesn't love her fiance. And it gets worse when he discovers that her heart lies elsewhere. Soon everybody is after the poor Princess in one way or another, and James is forced to choose between his two lives for the safety of his own betrayors.

The Purple Widow contains examples of