Literature / They Shoot Horses, Don't They? 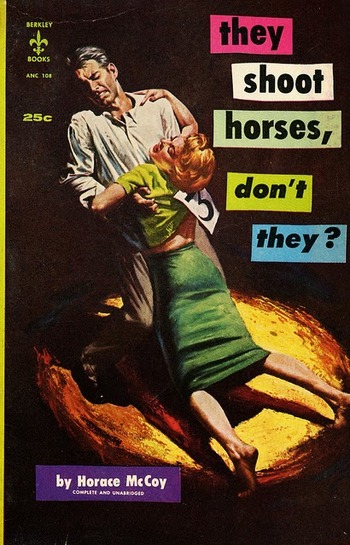 They Shoot Horses, Don't They? is a 1935 novel by Horace McCoy, about the participants in a grueling dance marathon during The Great Depression.

As the novel opens, the narrator, would-be director Robert Syverten, is being sentenced for the murder of Gloria Beatty. In a series of flashbacks, we learn that Robert and Gloria met in Hollywood after auditioning as extras for the same film; when they are turned down, Gloria suggests to Robert that they participate in a dance marathon at a rundown oceanside ballroom in Los Angeles. The rules of the marathon are simple: the dancers dance round the clock apart from ten minute breaks every two hours, and the last couple standing receives a $1,000 cash prize. The 144 participating couples, suffering from the poverty and desperation of the Depression, are drawn almost as much by the free food as by the cash prize.

The marathon promoters engage in various schemes to spark audience interest: a contestant is arrested for murder, two contestants are married on the dance floor, and nightly "derbies" are held in which the remaining dancers compete in a race around the perimeter of the ballroom, with the last couple automatically eliminated from the marathon. As the audiences grow, some of the contestants (including Robert and Gloria) are sponsored by local businesses, who give them clothes promoting their merchandise to wear during the marathon.

However, as the marathon continues to drag on, couples break down physically and are forced to drop out. After 879 hours (just over five weeks), with twenty couples remaining, there is a shooting in the bar of the ballroom (Mrs. Laydon, the widow who obtained Robert and Gloria's sponsorship, is killed by a stray bullet), and the marathon is shut down, with the prize money split between the twenty couples ($50 each). Gloria, who has spent the marathon repeatedly telling Robert that she wishes she were dead, takes a pistol out of her purse and, admitting she lacks the courage to shoot herself, asks Robert to do it for her; he complies, and as the police arrest him and ask him why he shot her, he thinks back to seeing his grandfather put a wounded horse out of its misery and answers, "They shoot horses, don't they?"

The novel was adapted into a film of the same name in 1969.