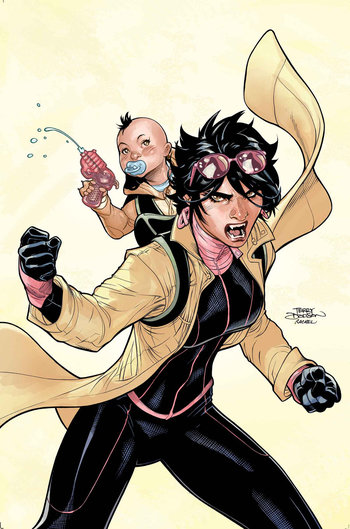 X-Man. Mom. Vampire?
"I feel like I'm drowning in my own blood and I'm terrified to open my mouth because I don't know whether I'm going to breathe or drink. And I'm looking at everyone through an inch of glass. Like they all know exactly where the line is between them and me."
— Jubilee, Wolverine and Jubilee #1

Jubilee started out as a peppy Chinese-American teenager who, following the death of her parents, discovered her mutant power of creating energy blasts from her fingers and was eventually welcomed by the X-Men. She was intended to do for the new fans of the 1990s what Kitty Pryde did in the 1980s — serve as a viewpoint character for teenagers. As such, she became Wolverine's kid sidekick, and spent several years following him around, swinging between sarcastic mockery of his '90s Anti-Hero excesses and mortal terror expressed through Totally Radical dialogue. Then she got transferred to the junior team, Generation X, where over time she became the Genius Ditz team strategist.

She worked as the personal assistant/shenanigan-enabler of the title character in Patsy Walker, a.k.a. Hellcat!, but left the role to lead a team in Generation X (2017). At the end of that title, she was cured of her vampirism by a Phoenix Force-powered Quentin Quire and regained her original mutant power set.