Fanfic / Through Her Eyes 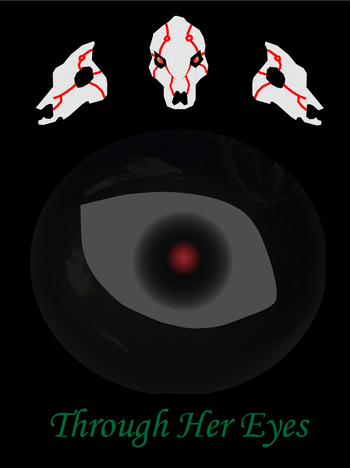 (Deviantart)
"Young lady, have you ever considered the importance of your eyes?"

is a RWBY Fan Fic by Peroth

. The story focuses on an alternate version of Ruby Rose who, rather than her traditional Semblance and the powers of the Silver-Eyed Warriors, instead possesses a Semblance to summon the Creatures of Grimm, and a pair of eyes all too familiar to Ozpin and his inner circle, that inflict anyone who sees them with crippling fear.

Forced to spend her childhood hidden from the world, and to wear goggles that hide her eyes and her secret, Ruby is still just as determined to be a Huntress, despite the opportunity of attending a Huntsmen Academy being seemingly closed to her. Things change for her when Professor Ozpin offers her a place at Beacon Academy, in spite of the risks of anyone finding out about her powers or, worse, her losing control of them all together. He only has two conditions: no one can find out about Ruby's abilities, and she must learn to control them so they don't get out of hand.

The first volume was completed on May 12th, 2018, at 426,000 words, with the author expressing plans for more in the future. A "remastered" version that condenses, rewrites, and expands much of this volume has also been started, and can be found here: Through Her Eyes: Remastered

This Story Provides Examples Of: