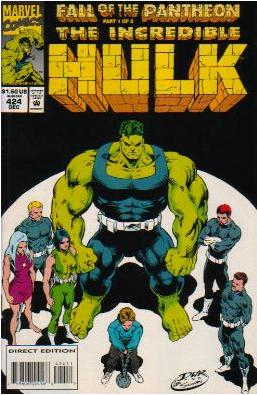 The Pantheon is a group of Marvel Comics, that the Incredible Hulk had once joined. The organization was first introduced in #368 (April, 1990) and was fleshed out over later issues.

Right after having his multiple personalities merged, Hulk was invited to join the Pantheon. He refused, and pushed Atalanta aside, which drove Ajax nuts and started a fight. To prevent further damage to the population, Hulk feigned being defeated and let the Pantheon take him to their base. Once there, he continued the fight, until the leader Agamemnon asked him to stop and gave him a tour of the place. The Mount is a community that tries to work for the good of mankind and prevent or stop potential disasters. Hulk accepts to join.

One day, Agamemnon left the Mount to explore the real world a bit, leaving Hulk in charge during his absence. But then, the alien Trauma finally captured Atalanta, and revealed the dark deals that Agamemnon had made with them. Once in Earth, Agamemnon is located and brought back to the Mount, to face a trial. Agamemnon unleashes his monsters, leading to the destruction of the mount and his death. The Pantheon broke up after this.

The Pantheon contains examples of: