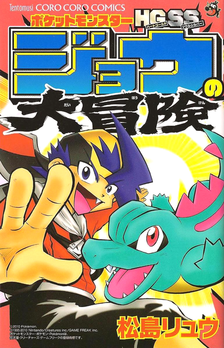 Pocket Monsters HGSS - Jou's Big Adventure is an one volume Pokémon manga based off of Pokémon HeartGold and SoulSilver.

The manga tells the adventure of a boy named Jou as he goes on a Pokémon adventure with his Totodile. It follows the game's plot—beginning with Jou getting his starter from Professor Elm and ending with him battling Red on Mt. Silver.

Jou's Big Adventure was only released in Japan and Thailand.