Nightmare Fuel / When the Wind Blows 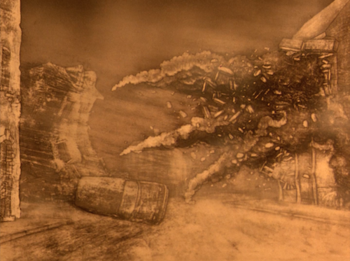 It's a cartoon about a very nice retired couple who could be your grandparents, pootling along with life while the doomsday clock reaches midnight, trusting in the advice of the government to survive World War III by stockpiling peanut butter and hiding in the cellar until civic order is restored. Then they survive the bomb and are heartbreakingly oblivious to their slow grim fate. As if all that isn't bad enough, it's drawn in the same style as the charming and happy Christmas institution The Snowman. Imagine a much-loved animation that the whole family can gather round at the holidays, like How The Grinch Stole Christmas or The Muppet Christmas Carol. Now imagine those characters, or ones who conceivably live in the same world, slowing dying of radiation poisoning with no-one coming to help because there's no-one else left alive.