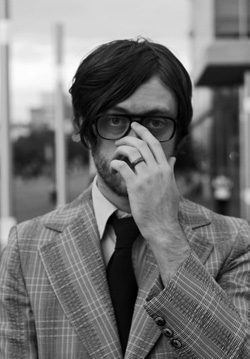 "And when there's nothing left
Ashes and silhouettes
Hope that I find a rest
next to you..."
—"Old Skin"
Advertisement:

Based in the Twin Cities, Jeremy Messersmith is a singer/songwriter. His official website is here

and his Daytrotters session is avaliable for free download here.

Has released three full albums. The Alcatraz Kid deals with growing up and young adulthood, The Silver City with married life and the working years, and The Reluctant Graveyard is about death and the residents of the titular graveyard. All of his albums are available for name your price download here