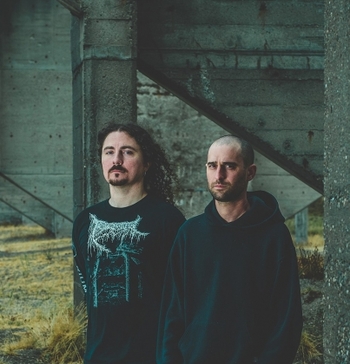 Bell Witch is a Doom Metal band from Seattle, Washington. Formed in 2010 by Dylan Desmond (bass, vocals) and Adrian Guerra (drums, vocals), the band plays slow, heavy, and extremely melancholic funeral doom. Their compositions tend to be long and minimalistic, with songs often lasting for upwards of 20 minutes and featuring long stretches of quiet ambience to punctuate the heavy sections. They also set themselves apart from their compatriots in the genre by eschewing guitar entirely, with Desmond serving as Lead Bassist instead. The band has so far released three albums and a demo tape, and has achieved significant underground success.

In 2016, Adrian Guerra was forced to leave the band due to his increasingly severe alcoholism, and with his blessing was replaced by his housemate, Jesse Shreibman, formerly of the grindcore band Transient. Shortly after this, Guerra sadly passed away in his home at the age of 35. Though Desmond and Shreibman had serious doubts about continuing the band after Guerra's death, they decided to continue on, recording a a new album and dedicating it to his memory. The album, entitled Mirror Reaper, consists of a single 83 minute long song, and was released on October 20th, 2017.