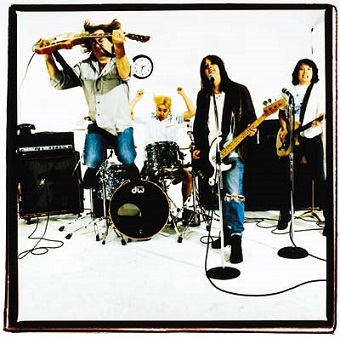 The answer is no. The question is "Who's the drummer?"
"Ace junk guitarist Kurt Bloch is the orchestra leader, off-key heroine Lulu Gargiulo his girl singer, and they care so much that if the mixes were cleaner they'd strike fear in the heart of the sainted Joan Jett."
—Robert Christgau
Advertisement:

Known as "the least ambitious band in rock" for maintaining their day jobs in the face of success, Fastbacks were a Pop Punk group active from 1979 through 2001. Drawing influence from 60's Girl Group pop and 70's Hard Rock, lead guitarist Kurt Bloch, rhythm guitarist/vocalist Lulu Gargiulo, and bassist Kim Warnick took to the Seattle circuit with poor early results. Provincialism reigned in the local rock scene, which spelled trouble for a punk band without a set drummer playing AC/DC covers. The addition of teenage multi-instrumentalist Duff McKagan on drums stabilized the lineup for a time. Fastbacks developed their following and became a draw in the local clubs, despite their reliance on a drummer too young to stay on the premises.

McKagan's departure to Guns N' Roses left them without a permanent drummer for a time, but Fastbacks graduated from local favorites to national cult heroes thanks to the early-nineties Grunge explosion and the 1992 Sub Pop-released singles compilation, The Question Is No. With Mike Mussberger now the semi-permanent drummer and the endorsement of grunge heroes Pearl Jam, Fastbacks released their biggest album, New Mansions In Sound in 1996.

In 2002, Warnick retired ("As much as those songs mean to me, I've just grown tired of having to be a singer in a rock band,") effectively breaking up the band. An odds and ends collection, Truth, Corrosion, and Sour Biscuits followed in 2004, and a one-off 2011 reunion show spawned (for now) one last single - a seventies rock cover, Cheap Trick's "Come On, Come On", this time going over somewhat better with the crowd.