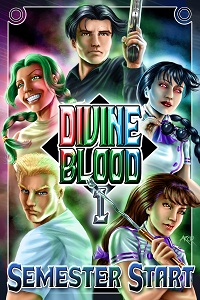 Main characters, or at least as close as the series gets to it.
"Evolution can be...inconvenient."
Advertisement:

The Divine Blood setting is a self-admitted cleaned up and Ascended Mega Crossover. The story as a setting includes giant robots, magic, psychic powers, Demons, Gods and intrigue.

The series revolves around Bravura Academy which is attended by exceptional, or at least rich, students from all over the world, and beyond it in one case. While most of the student body are relatively normal kids who are just incredibly talented, but some of the students have their own secrets which have drawn attention to the school from different factions of the world. Fortunately, the school is already sponsored by Avalon, a mercenary organization that is somehow connected with the major powers of the free world.

Public Chapters and short stories are available at the author's DA account.

Advertisement:
Entries in the Series

- While most of the cast is being taken hostage on the way to Sydney, Minaba wants a snack.

A Day in the Life of a Busy Woman

- A week after the events of Semester Start, Mao Semezou has a moderately aggravating day ahead of her.

- Once upon a time, Avalon pilot and sniper, Whelan Connor, was an IRA sniper. What ended that career?

Regarding the Proper Use of Force

- Gaetana Trolleti tenders her resignation to the Path of the Golden Dawn.