Fanfic / Point Me At The Skyrim 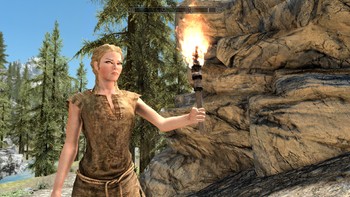 Victoria Dallon. Scholar. Warrior Monk. Glory Girl. Antares.
Dovahkiin?
A new facet is brought to the fore as forces beyond reality clash, and a wayward hero finds herself in a world far older than her own, and yet similar in some ways.
Setting forth to find her way back home, this unknown hero must face new foes and make new allies, lest she too fall prey to the machinations of those who crave her death... or worse.
— Author's Summary

In the year 2015, Victoria Dallon lands a vital blow against the Shard Network and briefly loses her powers. In 4E 201, Victoria Dallon awakens bound on a cart to Helgen, heading to an early execution.

Point Me At The Skyrim

by Ridtom is a Ward and The Elder Scrolls V: Skyrim crossover, replacing the Player Character Dragonborn with the superheroine Antares.

Can also be read at Sufficient Velocity

Point Me At The Skyrim provides examples of: