Get excited for these character tropes from Dr. Stone.

In the year 2019, Earth's entire human (and sparrow) population were petrified into stone statues under mysterious circumstances.

Roughly 3,700 years later, a number of people either broke free from their petrification through sheer willpower, or were revived using Senku's de-petrification formula. These people would go on to join Senku in his quest to rebuild modern civilization.

"The dawn of the kingdom of Science begins..."
"The two of us high school brats are going to build a civilization out of nothing. We're going to become the Adam and Eve of this stone world."

A high school student with an intellect and well of knowledge that could rival even the modern world's greatest minds. Case in point, his dream is to go to space by making his own rocket. After being petrified, he was able to remain conscious by constantly counting the seconds for 3,700 years. His current objective is to recreate civilization in the Stone World by creating what he calls a Kingdom of Science.
Taiju Oki

"I'll leave the thinking to you, Senku! So rely on me for the physical parts!"

Senku's best friend. Though nowhere near as intelligent as him, he makes up for it with his strength and endurance, and is fiercly loyal.

The Childhood Friend of both Senku and Taiju and the girl Taiju loves. She is revived soon after Taiju and Tsukasa. 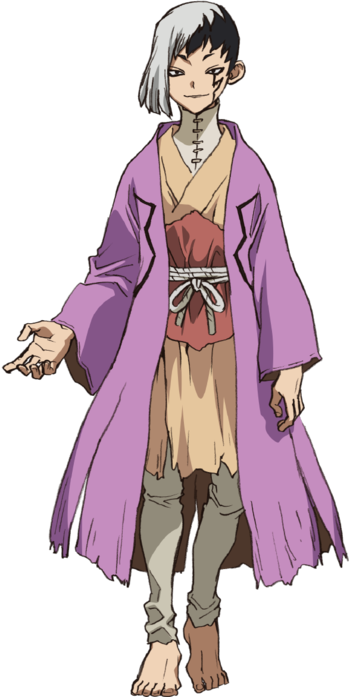 "No matter which one of you falls, I'll be riding the winning horse."
"I've got no policies, morals, or hangs-ups at all! The world's most silver tongued man!"

A well-known stage magician prior to the petrification event, the 19-year-old Gen Asagiri was initially revived by Tsukasa Shishio as part of his Empire of Might, but soon defected to Senku's Kingdom of Science. Gen's abilities as a self-styled mentalist and aptitude for lying make him a highly-valuable asset in the Stone World.
Ryusui Nanami 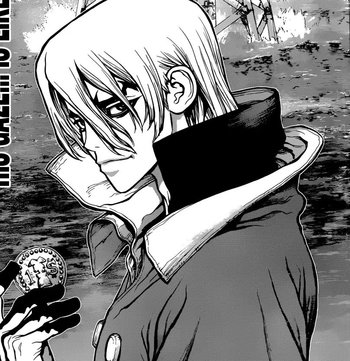 Heir to the now extinct Nanami conglomerate and director of ocean-based Nanami school, depetrified by Senku for his unrivaled captaining skills. 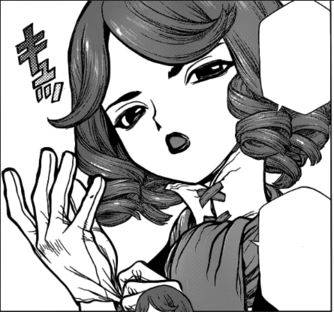 Nanami Ryusui's butler. A faithful and extremely talented servant whose services were in high demand before civilization fell.

A small population of 40 non-petrified people in the Stone World, who Senku encounters while investigating the source of smoke signals, gradually recruiting them (and the rest of the village) into his Kingdom of Science with his various re-discoveries of lost inventions and technology.

In General
"It's likely that neither Kohaku nor any of these people know about what was modern civilization. In other words, this village is made up of the descendants of revived people!"
— Senku
Kohaku

"I couldn't hear what you were talking about, but I don't give a damn! If you've got something to say, apologize to that gentleman sorcerer! And then keep apologizing until your very soul rots!"

One of the village's fighters and caretaker of her sister Ruri. She's also the strongest fighter in the village. Kohaku takes a liking to Senku after watching him confront Tsukasa, then helping her after she is nearly crushed by a tree. She becomes Senku's first villager ally, although she is annoyed by Senku's personality.

"Nah, I'm not calling myself a sorcerer anymore... I'm a scientist!"

A young villager regarded as a "Sorcerer", but his "sorcery" is the result of very primitive but meticulous research and experimentation on his surroundings. After meeting Senku, Chrome develops a respect for his superior and becomes his partner and assistant in matters of science. Chrome has a good heart and wants to cure his crush Ruri from the disease she's afflicted with, hence his research. However, Chrome is also an opportunistic braggart.

"Secret Technique: Leave It To Somebody Else!"

A fighter and guard of the village. Unlike his older brother, Kinro, he is much more lax in his duties, and will try to get someone else to do his work if possible. 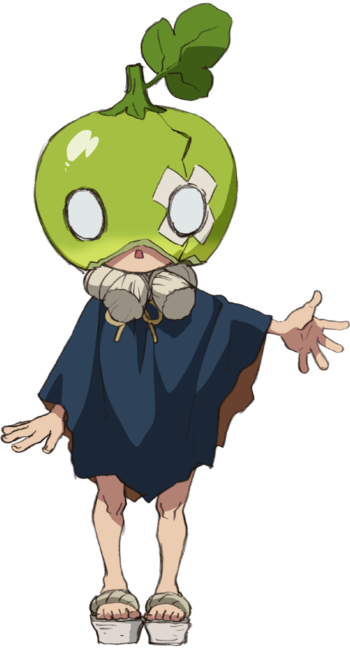 "Since I'm always wearing this thing on my head, I'm never able to be useful to anyone. I'll probably be the same when I grow up... That's why whenever Suika sees someone who needs help—"
Click here 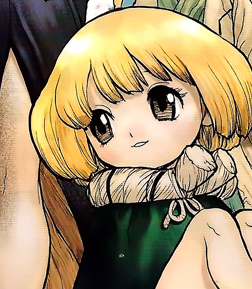 to see Suika as she appears without her mask on.

A child wearing a watermelon mask who ends up one of Senku's allies. 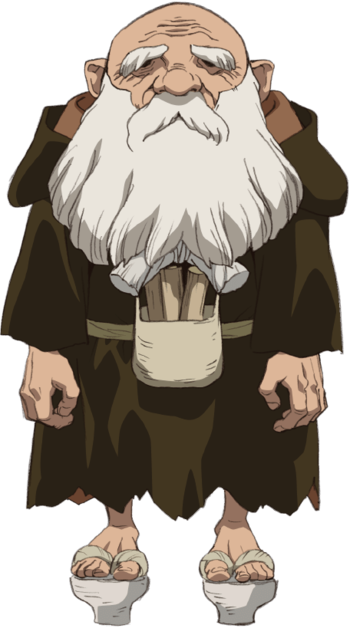 An elderly craftsman who gets drafted into helping Senku's group make glassware.

Kohaku's older sister, and the shaman of her village.

A small, weaselly supporter of Magma.

Kohaku and Ruri's father and chief of the village. Often gets fed up with his younger daughter's antics.

A nameless villager of Ishigami Village who is actually from another village overseas; he was sent away by his parents when he was a baby. He knows about the island that has the Soyuz spacecraft.

A group of de-petrified humans led by Tsukasa Shisho, who oppose Senku and his Kingdom of Science's efforts to restore civilization, along with its perceived corruption and flaws. Tsukasa himself handpicked young people with physical or athletic abilities that fit with his Darwinian vision and then revived them with the source of the de-petrification formula taken from Senku. 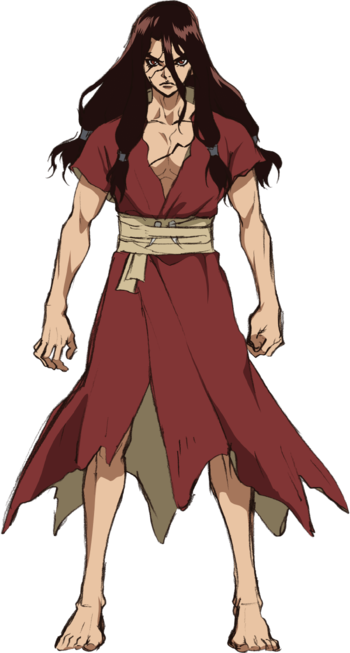 "You can call it killing if you want... It's a matter of perception. I'm culling humanity, for the sake of a new world."
"This Stone World is a paradise that is not yet tainted! Let's just revive the young people, we'll live together, with nature, which doesn't belong to someone else! It's an opportunity to cleanse humanity!"

The first person Senku revives from petrification, known as the third man. Before the Stone World incident, he was known as the strongest high schooler, and well known for his immense skill in the martial arts world. His harsh background, however, has given him a hatred for modern society, and he quickly becomes Senku's enemy in his quest to rebuild the world.
Hyoga 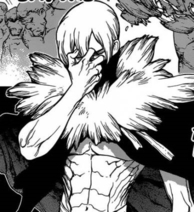 One of Tsukasa's lead generals, who makes his presence known when the Stone War Arc begins. 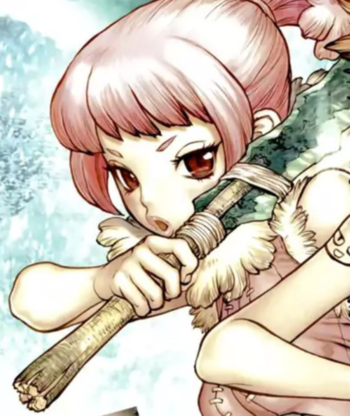 A young woman in Tsukasa's army. She serves as Hyoga's right hand and acts as a spy/scout outside of combat, keeping an eye on Ishigami village from the trees. 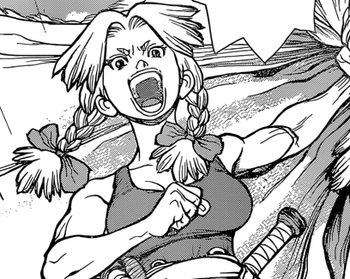 "Allllright then, let's make a deal!! I don't see why I can't get on board with your plan!"

A sentry in Tsukasa's army. Upon discovering Senku's telephone, she tries to destroy it, until the voice of her favorite singer sways her to turn. 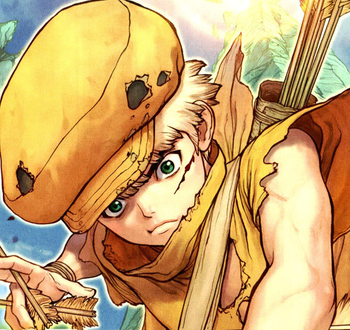 One of Tsukasa's direct subordinates. Formerly a submarine sonar operator, he has an extraordinarily sharp sense of hearing. 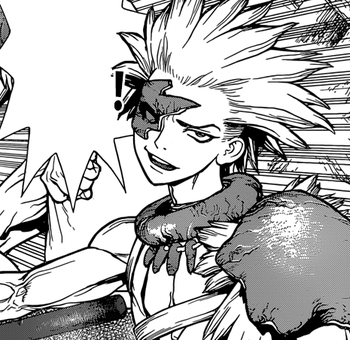 A former policeman recruited into Tsukasa's Empire of Might. While Chrome is captured, he's in charge of guarding the prisoner and setting up the traps to foil Senku's rescue plan. 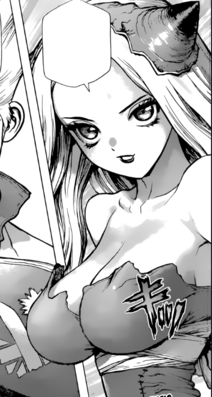 Formerly a reporter, Tsukasa utilized her skills to decide who to revive.

Tsukasa's younger sister. She had been rendered brain-dead prior to petrification, leading Tsukasa to become a prized fighter to pay for her life support. After winning the Stone War, Senku uses the de-petrification formula to free her and bring her back to full health.

A multinational team of six astronauts and cosmonauts, who were spared from petrification due to being aboard the International Space Station at the time of the event. They subsequently returned to Earth in a pair of Soyuz spacecraft, living out their final days on a secluded island. 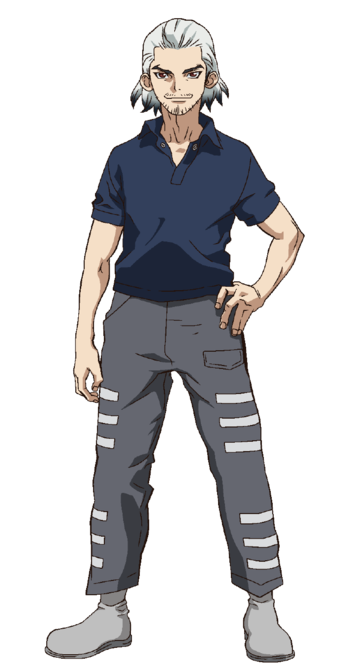 "...I'm sure you're not the kind of kid to watch these broadcasts... but I swear I'll bring you back home a mountain of scientific souvenirs from space!"
"Wait to be rescued? You've got it totally wrong... we're the ones that are going to do the rescuing! For the entirety of humanity... All 7 billion of them!"

Charming and mischievous, Byakuya was one of the astronauts stationed aboard the International Space Station during the stone incident, and the sole Japanese member of the expedition.
Lilian Weinberg 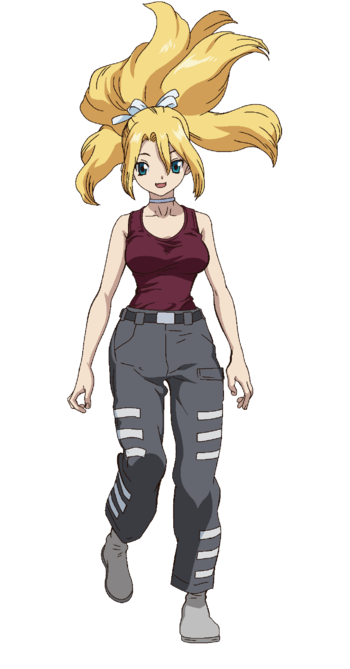 A famous American pop star who paid 50 million dollars to visit the International Space Station as a space tourist, presumably for promotional purposes. 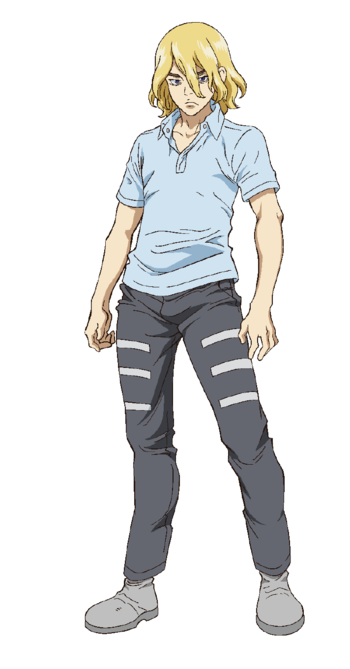 A snarky, deadpan Russian cosmonaut who was on board the International Space Station. 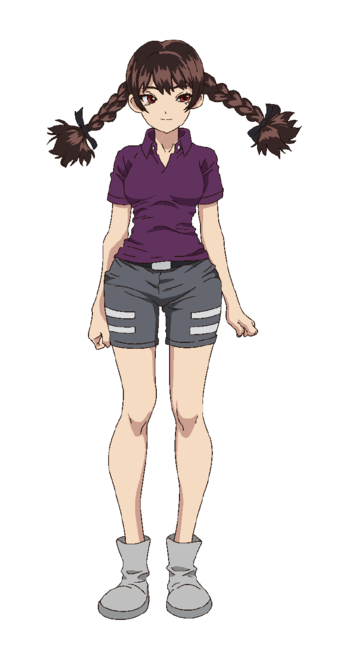 An American astronaut aboard the International Space Station. 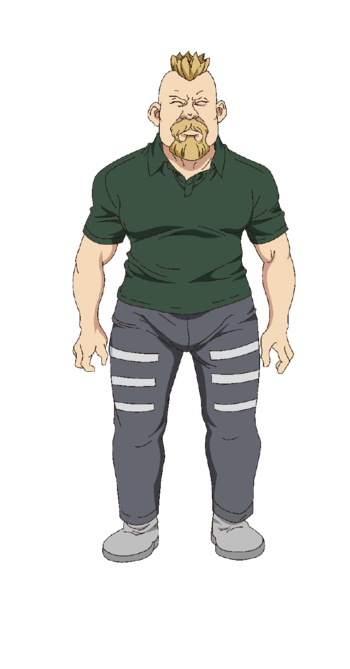 A Russian cosmonaut aboard the International Space Station, husband to Darya Nikitina. 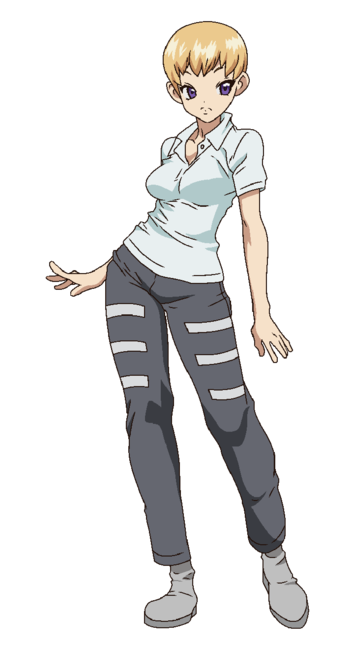 A Russian cosmonaut aboard the International Space Station, wife to Yakov Nikitin. 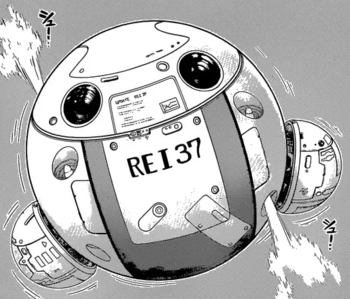 A Zero-gravity flying robot created by Byakuya with Senku's help, in order to assist the space mission. It is introduced as Rei v37, but its version number continuously grows as it replaces and upgrades its body in order to fulfill its single-minded goal of keeping the ISS in orbit as long as possible out of a false hope that Byakuya may one day return to it.

An unknown force from outside the Kingdom of Science and Empire of Might. It is implied that not only do they have a similar level of technology as the villages, but they may also possibly be connected to the source of the Petrification. They are dubbed Whyman for repeatedly transmitting WHY in Morse Code after detecting Senku's broadcast.

The current inhabitants of the island where the astronauts from the final expedition to the International Space Station spent their final days. Senku and the crew of the Perseus expedition encounter them while searching the island for the Soyuz spacecraft Descent module that his father Byakuya and his fellow astronauts converted into a time capsule of precious metals and rare materials Senku would need to help rebuild civilization.

Stanley Snyder
An ex-soldier who works for Dr. Xeno.
Dr. Xeno
A former NASA scientist and mentor to Senku with extremely ruthless views on science. Having previously freed himself from petrification and established his own empire, he comes into conflict with the Kingdom of Science when they arrive in America.
Luna
A beautiful woman who works for Dr. Xeno.
Carlos and Max
A pair of guys that follow Luna wherever she goes. Both are incredibly loyal to her.
Dr. Brody
A mechanic working for Dr. Xeno, designing his weapons and crafts.
Dr. Chelsea 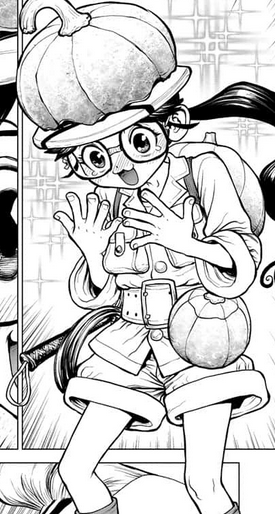 A scientist who excels at geography. She was stranded in the forest until Senku and Xeno found her while traveling to South America. 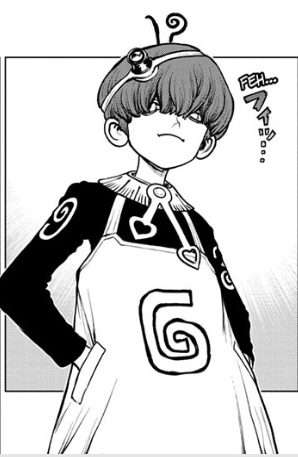 A famous watchmaker who used to work for Rodex. He's skilled at working with very intricate machines such as the Medusa.