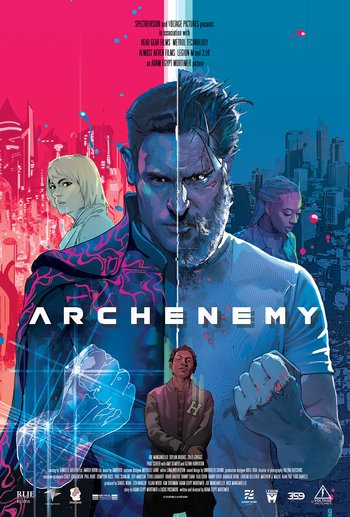 Depowered, not powerless
Archenemy is a 2020 Independent Superhero Mystery-Thriller film, starring Joe Manganiello and Skylan Brooks, directed by Adam Egypt Mortimer, and based on a story by Mortimer and Lucas Passmore.
Advertisement:

Teenager "Hamster" (Brooks) becomes intrigued when meets a mysterious alcoholic homeless man who goes by the moniker "Max Fist" (Manganiello), who claims to be a superhero who lost his superpowers after arriving from another dimension. Together, they take to the streets to wipe out a vicious crime boss and his local drug syndicate.