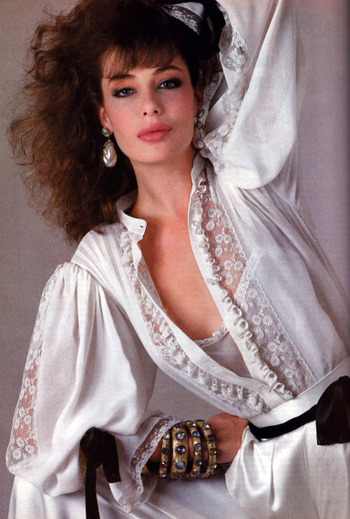 Born in New York City and raised in London, LeBrock began her career as a model at age 16, with her big breakthrough came at 19, when she starred in a 24-page spread in Vogue. Shortly afterwards, she contracted with Christian Dior to work for that fashion label for 30 days a year. She subsequently appeared on numerous magazine covers and in fashion spreads, and became one of Eileen Ford's most sought-after models. She became especially recognizable as the Pantene shampoo commercial spokeswoman whose line "Don't hate me because I'm beautiful" became a pop culture Catchphrase.

Her first marriage was to film producer and restaurateur Victor Drai, in 1984; they divorced in 1986. Her second marriage was to actor and martial artist Steven Seagal in 1987 and they had three children, but divorced in 1996. In July 2007, she married retired investment banker Fred Steck.