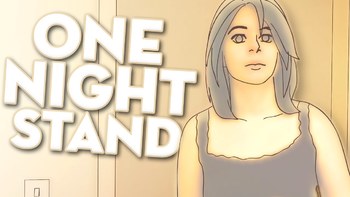 You got lucky last night! Now you have to deal with a hangover and a really awkward morning.

One Night Stand is a visual novel released as part of NaNoRenO 2016 by developer Kinmoku.

After a drunken night out, you awaken with a foggy memory and confusion as to where you are. This place doesn't look familiar. Looking down, you realize that you're completely naked. Looking to your right, you notice a sleeping female.

Over the short length of the game, your actions will determine your future relationship with said girl as you learn more about her and just what exactly happened last night.

The NaNoRenO version is available for free on itch.io

. A complete version of the game was released on November 7, 2016 on Steam

One Night Stand provides examples of: