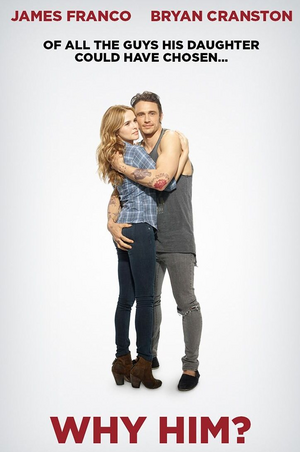 Why Him? is a 2016 rom-com film directed by John Hamburg and distributed by 20th Century Fox.
Advertisement:

Ned Fleming (Bryan Cranston) goes on a trip with his wife and teenage son to visit his daughter Stephanie (Zoey Deutch) at Stanford over the Christmas holidays, only to have to deal with (and suffer) her boyfriend, Laird Mayhew (James Franco), a very eccentric and very socially awkward Silicon Valley billionaire.