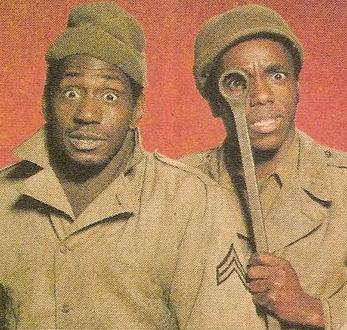 Those Two Guys of Roll Out!
Advertisement:

Roll Out! was a military sitcom that aired on CBS in 1973, and focused on a supply unit in France during World War 2, and had a mostly African-American staff; the main driving forces (No Pun Intended) of the show were Corporal Carter "Sweet" Williams - a schemer and a dreamer who always wants to come out on top, and P.F.C. Jed Brooks - who is more or less the voice of reason of the two. Other characters include High Strung and Wheels Dawson, who serve as Sitcom Arch-Nemesis to Sweet and Jed; Sergeant B.J. Bryant, the ranking non-commissioner officer over the rest of the drivers; and Captain Rocco Calvelli, the commanding officer of the entire unit.

The show was actually created by Larry Gelbart and Gene Reynolds, the creators/producers behind M*A*S*H; CBS saw what a success M*A*S*H had become, and turned to Gelbart and Reynolds to create another military sitcom for them, in hopes on further cashing in on the success and popularity of the former series. Whereas M*A*S*H drew parallels from The Vietnam War for its anti-war satire of the Korean War, Roll Out! drew on race relations for its humor. Roll Out!, however, did poorly in the ratings, and lasted only one season.